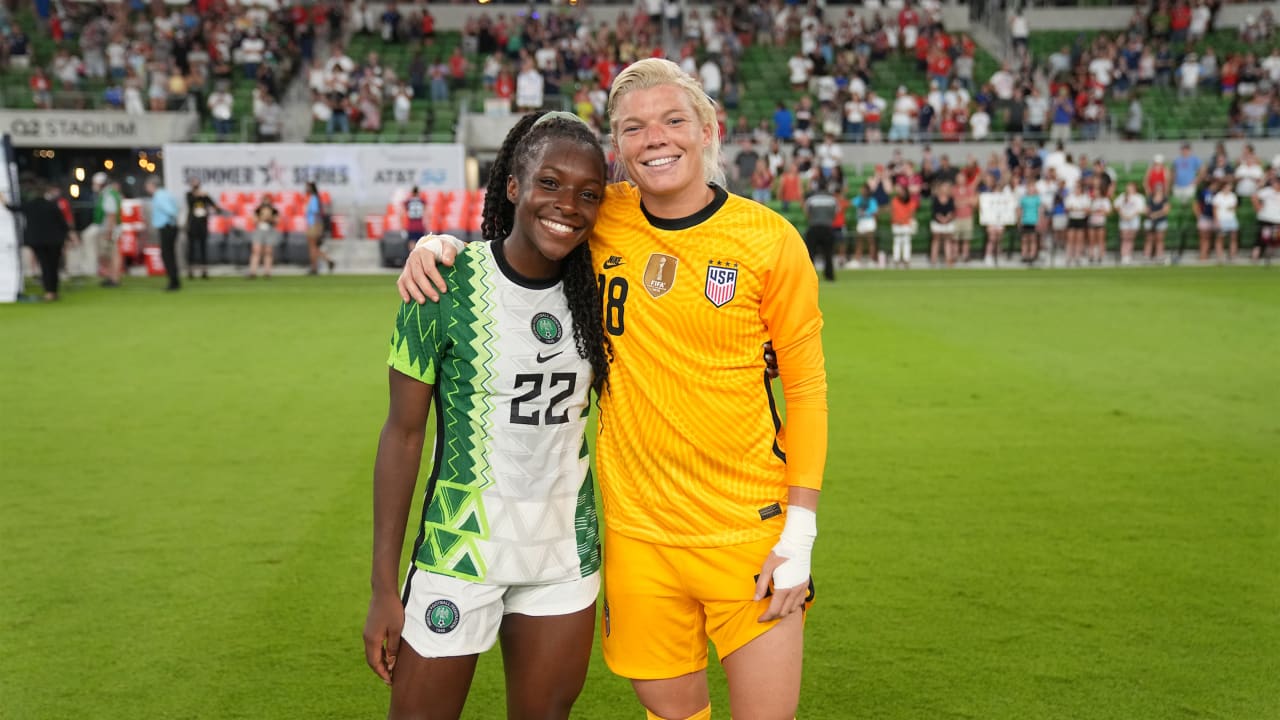 When Houston Dash forward Michelle Alozie was first called up to the Nigerian national team, she didn’t necessarily know what to expect. This was her first time in Nigeria without her parents, both of whom were born there.

However, once she got there and began learning more about the state of the soccer in Nigeria, she very quickly realized that she needed to do something to help grow the game that she loves in the country that she represents on the pitch. And she knew just how to do it.

“At the beginning of the year, our captain Jane Campbell actually told the team that we should gather things, anything we have in excess, so we can donate them. I didn’t really know where (they were being donated),” Alozie said. “When I got called up to camp in Nigeria, that was the first time I was there without my family and really seeing the soccer scene of Nigeria and really realized there are a lot of underprivileged people there, but they’re all really big soccer fans. So when I came back, I asked Jane if it was okay for me to take all of those donations and bring them to Nigeria for the next camp and she said ‘of course.’”

It wasn’t just Alozie that didn’t know where the gear was being donated. Campbell herself didn’t necessarily have an idea of where that gear would end up. And she definitely couldn’t have predicted that it would be one of her own teammates that would end up personally bringing that gear more than 6,000 miles away to donate to the various groups desperately in need of new equipment.

“I wanted to start donating our equipment because so many times players run through boots or shin guards or even old socks and shorts and I saw them just being tossed in the trash can,” Campbell said. “So, I asked around and wondered if we could actually donate this equipment and clothing to people. I asked the team instead of throwing away all those items let’s just make a big pile and donate it. Then, Michelle asked if she could take it to a camp to then donate and of course I said yes.”

Alozie, who spends her spare time when she’s not playing for the Dash as a lab assistant doing oncology research in the Texas Medical Center, planned to bring the gear with her when she went back to Nigeria for the national team’s December camp. The only question left was how to transport all of the equipment. That part actually proved easier than expected, due to some creative packing decisions on Alozie’s part.

“It actually wasn’t that bad. For camp, all you need is a few t-shirts because they obviously give you a lot of gear,” Alozie said. “So, I just packed all that I really needed in my backpack and you’re allowed two check-in bags. I was pretty sure that I was bringing less than 100 pounds of gear, so I just packed it all into two bags and took them over there.”

Once she got both suitcases into the country, she once again relied on teammates to help her deliver the equipment, with Barcelona’s Asisat Ohshoala and Athletico Madrid’s Rasheedat Ajibade stepping in to take as much as they could to various parts of the country. Anything they couldn’t bring with them was given to the youth teams. For Alozie, seeing the donation actually get delivered proved well worth navigating the logistics of bringing it all with her.

“They were amazed by the generosity,” Alozie said. “We at Houston are obviously so privileged to be sponsored by Nike, so we have this flux of cleats that sometimes don’t go used. So, I was so happy and grateful to be able to bless them with some new cleats.”