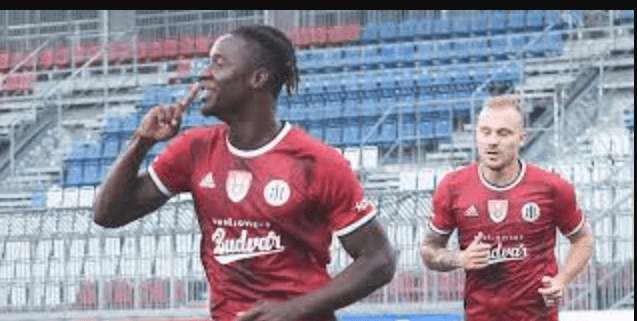 Nigerian forward Fortune Bassey admits that a near-impossible task awaits Viktoria Plzen when they clash with 2021 Serie A champions Inter Milan on Tuesday.

Viktoria Plzen are expected to be the whipping boys of a Champions League group with Barcelona, Inter Milan, and Bayern Munich.

The reigning Czech league champions did not disappoint the bookmakers when they went down 5-1 to Barcelona at Camp Nou last week. Bassey was a 66th-minute substitute in that encounter.

Plzen are back at their own stomping ground, the Doosan Aréna, where they will look to take all three points away from Inter.

Bassey is aware that it is next to a mission impossible. But the 23-year-old says Viktoria Plzen will be motivated by the desire to finish third in Group C to guarantee safe passage to the Europa League.

“The important thing for us is to give everything and achieve results if we want to overcome the group or aim for the Europa League.

“We have to give our best as a team. Inter are a difficult opponent. We have to try, do our best, and see what happens on the pitch.”

Aside from targeting a win against Inter, Fortune Bassey will be hoping to get his first goal for Viktoria Plzen.

On loan from Hungarian top-flight side Ferencvaros TC, Bassey has featured in six games for Plzen and has only registered one assist.