In 1996, Nigeria stunned the footballing world by winning gold at the Atlanta Olympic Games. The team's story is told in a new documentary, "Super Eagles 96."

(CNN) - When Nigeria’s national football team competed at the 1996 Atlanta Olympics, few thought it could stand shoulder-to-shoulder with countries like Argentina and Brazil. But the team, lovingly nicknamed the Super Eagles, stunned the footballing world by winning gold in the world’s biggest sporting event.

“Super Eagles 96,” a new documentary by London-born filmmaker Yemi Bamiro, which recently premiered at the London Film Festival, showcases this brief, but important moment in Nigerian history. Though Bamiro was just 13 when the Atlanta Games took place, the team left a strong impression on him. “Those guys are superheroes,” Bamiro tells CNN. “As someone who loves football and someone whose parents are Nigerian, the Super Eagles were always around in our culture and household.”

Bamiro spent nearly two years making the film, shooting in the UK and Nigeria, and interviewing a mixture of experts and players including Jay-Jay Okocha, Taribo West and Celestine Babayaro. 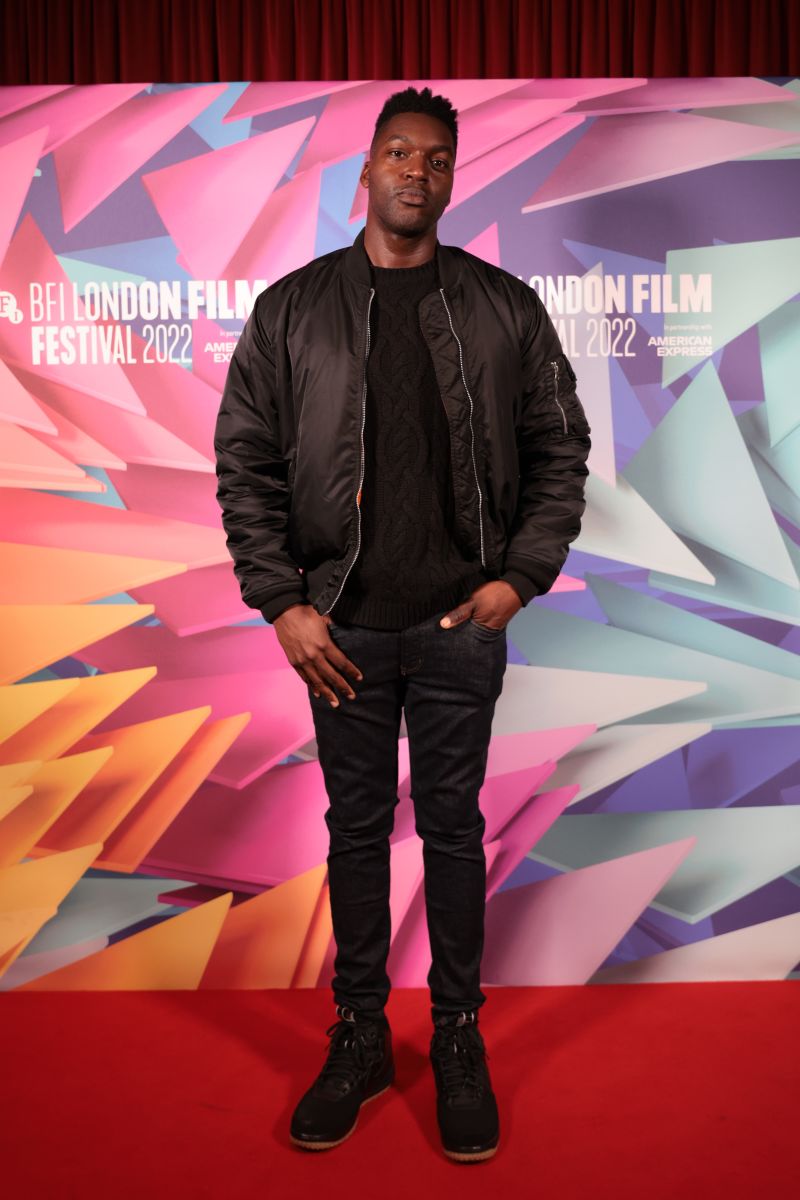 The team was coached by Dutchman Jo Bonfrere, but it’s another Dutch coach who is widely credited for much of the team’s success. Clemens Westerhof, the “Dutchgerian,” coached the national football team between 1989 and 1994, laying the groundwork for the Olympic victory. He is central to the film, noted for his talent for scouting out players, but also his sheer determination. “I’m a bad loser, I want always to win,” says Westerhof in the film.

Despite Nigeria’s previous mixed fortunes in the sport, it has always prided itself as being a footballing nation. Football is popular even in the poorest parts of the country and during the opening moments of the film, Bamiro depicts children playing the game on a marsh beneath an overpass.

“From a young age, all I dream(ed) about was football,” Super Eagles defender Taribo West says in the film, adding that he and his countrymen often lacked the opportunities that would be taken for granted in some of the sport’s most successful countries. 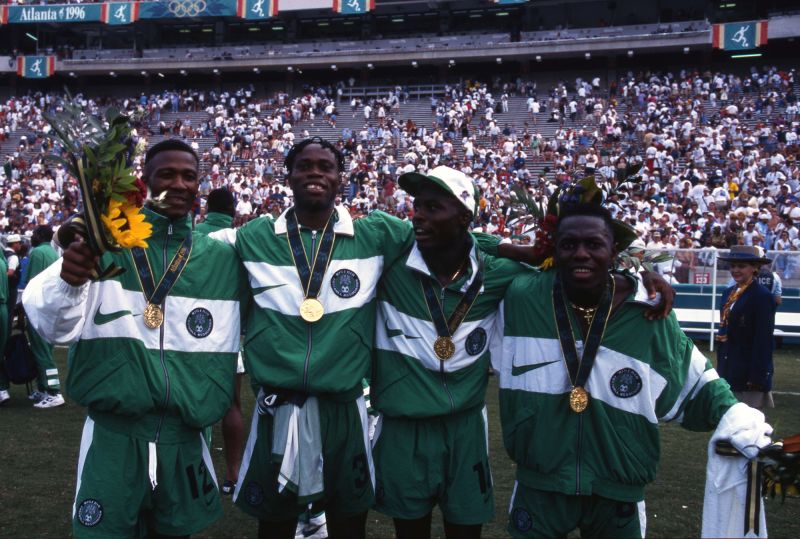 At the Olympic Games, the Nigerian team stayed in a motel that cost $10 a night, says West. “We were packed in a room. Two would sleep in a bed, others would sleep on the floor. After two hours, we would change. It was madness,” remembers West.

Nonetheless, their Olympic journey captivated audiences. Nigeria first made it to the quarterfinals, beating Mexico 2-0. Though losing to Brazil earlier in the tournament, Nigeria beat the then four-time World Cup-winning nation 4-3 in the semi-final, before pulling off a historic 3-2 win in the final over an Argentina team that featured international stars including Hernan Crespo and Claudio Lopez.

“The thing that unites Nigerians is football”

For Bamiro, though, the story of the team was impossible to tell without explaining the country’s turbulent politics around that time, which he said led to Nigeria being seen as a “pariah nation.”

After a decade of military rule, in 1993, civilian leader Moshood Kashimawo Olawale Abiola was widely believed to have won the June 12 presidential election, but the result was annulled by the incumbent military ruler Ibrahim Babangida. Abiola was imprisoned in 1994 after declaring himself the winner and died in custody in 1998. In 1995, Nigeria was suspended from the Commonwealth of Nations following the execution by the military government of nine environmentalists including Ken Saro-Wiwa, an activist and Nobel Peace Prize nominee who spoke out about oil pollution in his country. 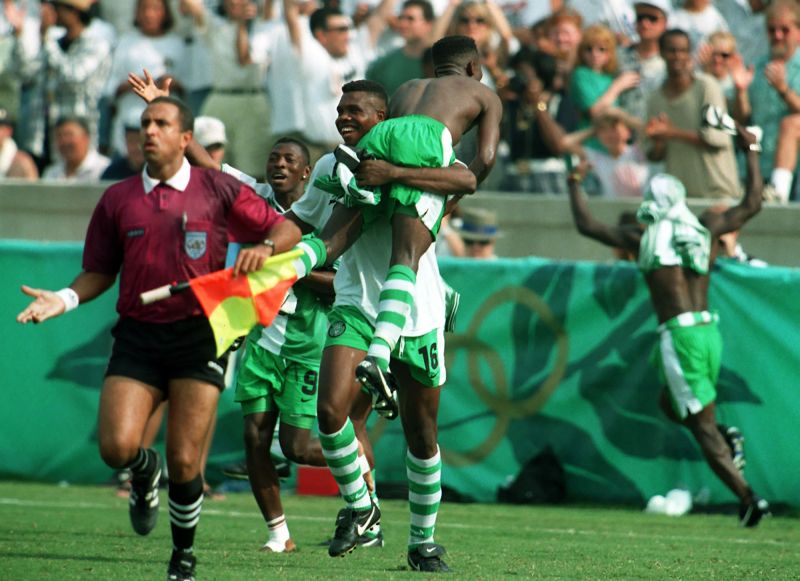 “It was only football that could take the weight of this trouble away,” recalls West in the film. “It’s a big country, but the thing that unites Nigerians is football.”

Bamiro echoes that sentiment. “If you’re a young boy growing up anywhere in Nigeria, it’s always about football,” he says. “It didn’t matter if you were from different tribes or different backgrounds.”

Ultimately, the film suggests that the Atlanta Olympics was not just a win for the team, but a win for the country. For a brief moment, Nigerians were able to forget their troubles and celebrate in a moment of unity.

In the documentary, Noo Saro-Wiwa, daughter of Ken Saro-Wiwa, remembers the effect the Super Eagles’ triumph had on her nation: “To see Nigerians smiling, laughing, and celebrating, I hadn’t seen that in such a long time. We were getting attention for the right reasons.”

The director believes the triumph helped changed Nigerians’ perceptions of their country. “That victory helped us to refocus people’s minds in that we are not defined by what our politicians do,” he says. “It’s a story about overcoming adversity, achieving something that no one expected them to achieve.”