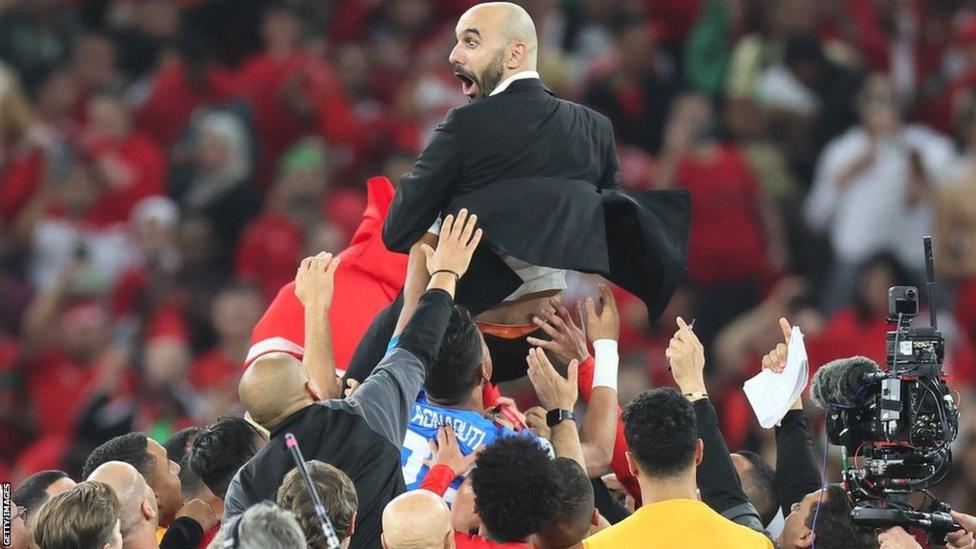 Dubbed 'avocado head', Walid Regragui has been a hugely popular and successful appointment as Morocco coach

Morocco coach Walid Regragui already knows what it feels like to win a trophy on Qatari soil and to receive a cup from Fifa president Gianni Infantino, and the big question this week is whether he can achieve both again on Sunday.

A suggestion that would have provoked ridicule before the World Cup has become an ever-narrowing possibility after Regragui stunningly steered the Atlas Lions to the last four.

Having already won domestic and continental club titles this year, if the 47-year-old is to lead an African and Arab side to a first World Cup final, then he will have to knock out the country where he grew up and played nearly all his club career.

"I come from the Parisian suburbs," he has previously said.

"We are hungry guys there and love challenges. The more you tell us we can't make it, the more we want to try."

This is fortunate as Regragui will face defending champions France on Wednesday (19:00 GMT), just three months after his first game in charge of Morocco.

Owing to inspirational man-management and a bond with his players that is close yet strict and trustworthy, the former international has moulded a talented squad to all pull in the same direction.

"The coach has managed to form this unit and that is his greatest achievement," Rachid Azzouzi, who played for Morocco at the 1998 World Cup, told BBC Sport Africa.

"Every player has respect for him and wants to carry out his plan - this is the reason they're playing so well."

Another is quite simply the belief that Regragui, who has delivered three wins and a penalty shootout success in four World Cup matches after just two victories in Morocco's previous 17, has instilled.

Those close to the former Ligue 1 and La Liga defender speak of him exuding positivity, noting that Regragui's own career progressed thanks to both his professionalism and belief.

He has now honed that into in his players.

Witness the way he calmly helped Munir Mohamedi keep a clean sheet against Belgium after being called upon at the last minute; how Youssef En-Nesyri, a selection criticised by some in the Moroccan media, has become the country's record World Cup goalscorer after Regragui's firm backing. 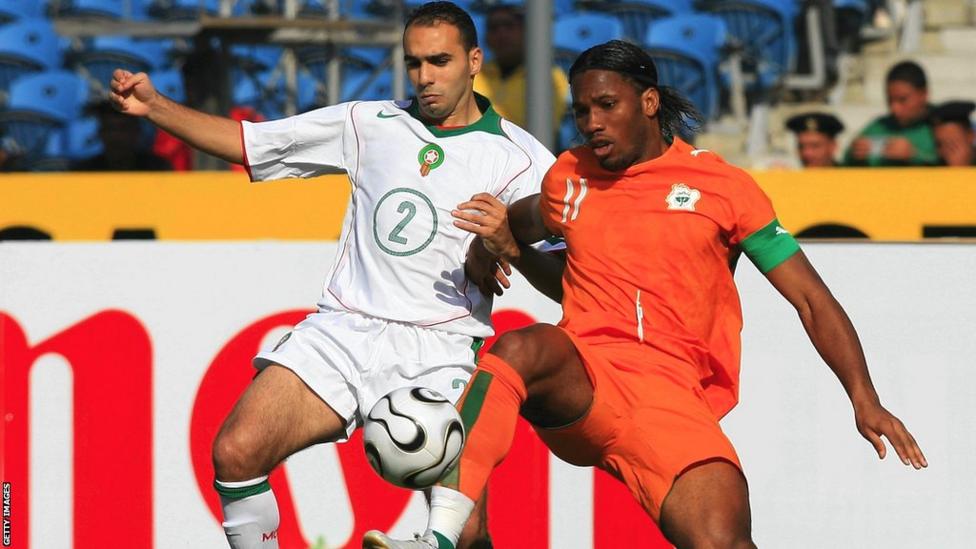 Appointed in August, Regragui instantly wanted to change the team's mentality. He delivered a simple message to his squad: anybody anticipating an early exit would not go to Qatar.

"If you are a small team, you need to dream and to believe," he said after Saturday's quarter-final win over Portugal.

"We have elite players - [Hakim] Ziyech for Chelsea, [Noussair] Mazraoui for Bayern, [Achraf] Hakimi for Paris St-Germain - in top clubs and a team that can win World Cup games.

"They have shown they are capable of that level of performance - that is important for future generations."

Before this tournament in Qatar, Morocco had beaten only Portugal (1986) and Scotland (1998) in five World Cups, with their previous best run, a second-round exit, coming 36 years ago.

Now, they have beaten three of the world's top 10 in a month, their on-field displays against Belgium, Spain and Portugal turbo-boosted by off-pitch support and their incredible fortitude shown by conceding just once at the finals despite such illustrious opponents.

Regragui's messages have clearly rubbed off.

"As the coach said, we needed to get rid of the feeling of inferiority we had," goalkeeper Yassine Bounou said after reaching the semi-finals.

"A Moroccan player can face anyone in the world now. We have indeed changed this mentality, and the generation after us know now Moroccan players can create miracles."

So too can Moroccan coaches. 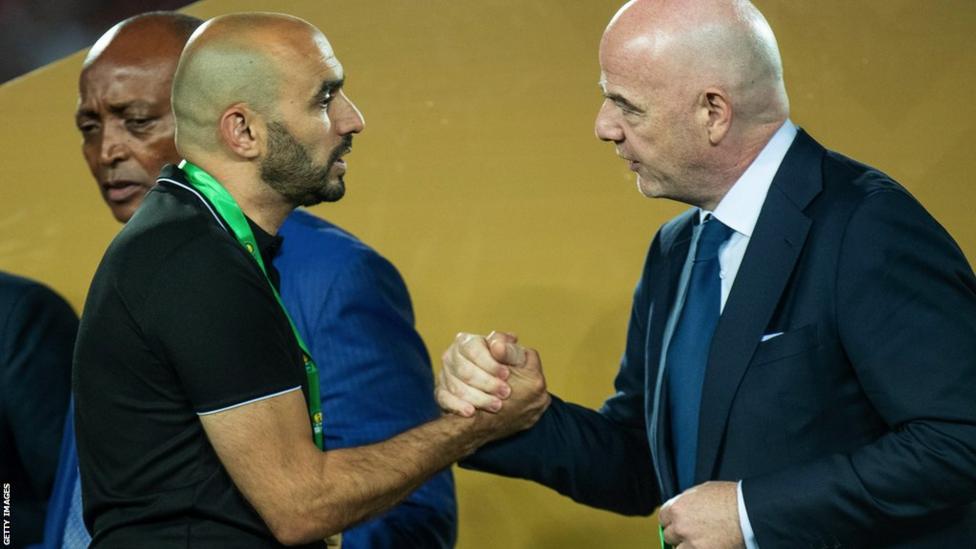 The sight of a Morocco fan waving his colours while driving through the country's streets is nothing unusual - certainly not this past month - but it is when the supporter is the country's state ruler.

King Mohammed VI is a huge football fan who, alongside Morocco's football federation (FMRF) president Faouzi Lekjaa, is largely responsible for massive support and financial investment - unrivalled in Africa - in their country's game.

In recent years, Lekjaa - a Confederation of African Football vice-president - has pulled many strings to the point whereby Morocco has often become the focal point for the continental game, hosting several key meetings.

On the field, Morocco have also impressed, twice winning the African Nations Championship (for players based in their own domestic leagues) and reaching a first Women's Nations Cup final and Women's World Cup this year, on top of Wydad Casablanca becoming African club champions for the third time.

Handily, Lekjaa is also a delegate government minister in charge of the country's budget - and with the North Africans keen on global promotion and football deemed a perfect vehicle, money is not in short supply on a continent where it is often sparse.

In recent years, the FMRF has pulled no punches, investing $20m in women's football and $65m into the state-of-the-art Mohamed VI training complex which, located on the edge of Rabat, was inaugurated three years ago by the King, who had already funded an academy in his name.

Yet, despite all the investment and the talent in the squad, there was a fundamental problem as the World Cup approached: star winger Ziyech had left international football following a row with then coach Vahid Halilhodzic.

Mazraoui had also been sidelined so Lekjaa seized the moment in August, summarily dismissing the Bosnian, then adding Regragui, the missing piece in his ongoing jigsaw who now had the chance to fuel the FMRF's long-advanced dream. 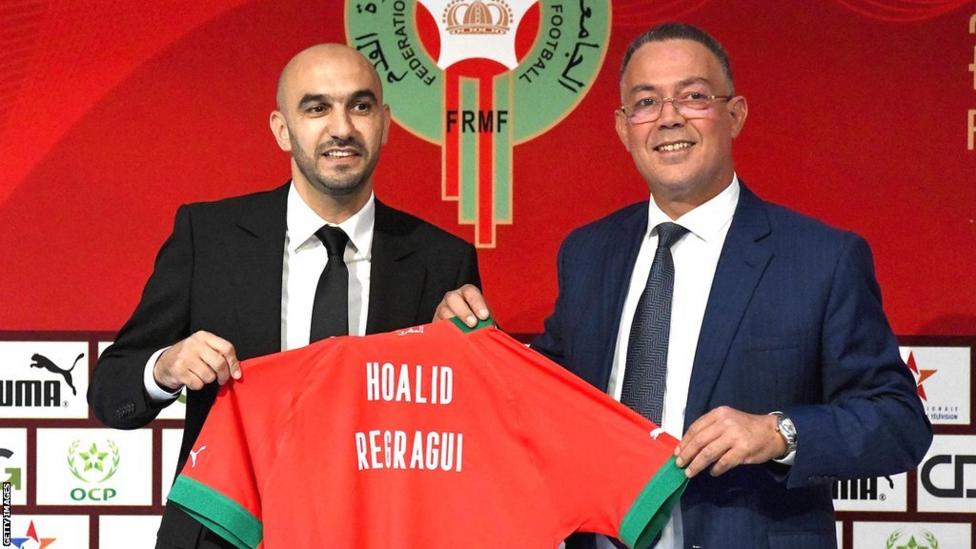 African champions just once, back in 1976, the Atlas Lions have reached only one continental semi-final and now one World Cup semi in three decades - with Regragui, who played every game as Morocco finished 2004 Nations Cup runners-up, the common denominator.

After a club career in Europe - with only a three-year spell at Spanish side Racing Santander taking him away from France, where he played for Ajaccio, among others - he started his coaching one in Africa.

A brief stint as assistant Morocco coach ended after a reported tactical row - then he took charge of his first club in 2014 and soon led FUS Rabat to a first title in their 70-year history.

"He was a player interested in tactics - the strategy of a match - who understood quickly," former Roma and Marseille boss Rudi Garcia said shortly afterwards.

"When he signed with FUS, he knew how he was going to manage his group and play. He used his experience as a player a lot."

Regragui added another league title with Al Duhail in Qatar in 2020, before a move to Moroccan giants Wydad delivered the club's joint-best season in a distinguished 85-year history when adding the league to the African crown won in May.

Dubbed 'avocado head' but a hugely popular appointment as Morocco coach, Regragui has not vastly altered the team - with just three changes between Halilhodzic's side beaten by Egypt in the Africa Cup of Nations quarter-finals in January and Regragui's preferred World Cup line-up.

Yet the changes were sizeable, as Mazraoui and Ziyech returned to the fold, while midfielder Azzedine Ounahi - one of four players in the squad from the Mohammed VI Academy - has seized his moment to shine.

The Ziyech saga has been rewarded. He is a winger without a club goal or assist this season, but he has registered the most shots, crosses and assists for Morocco in Qatar - though it is his pressing that may be unrecognisable to Chelsea fans.

"We have a clear gameplan and everyone has to work. I don't think Hakim and [Sofiane] Boufal have ever run as much in their life," said Regragui after the Portugal win. 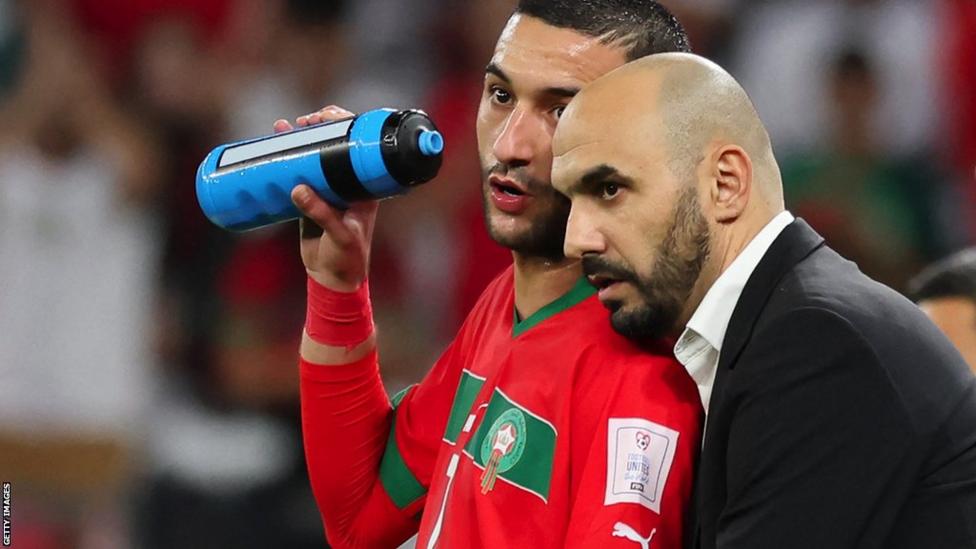 Regragui, who has brought out the best in Ziyech, regularly visited Morocco as a child, speaks a local dialect and now lives in Casablanca

Regragui's approach, typified by his defence's resolve, his midfield's energy and his forwards' flair, is to soak up pressure and hit opponents on the break.

The former Ivory Coast striker added: "He knew how to read the game, anticipate the next phases and close down the opponent.

"This is good for all the African managers. It's a great example of what to do to succeed in the World Cup."

With a squad forged in adversity during qualifying when fleeing a military coup in Guinea, Regragui could now become the first coach to win both a continental club title and World Cup in the same year.

African coaches have rarely been in demand by European clubs but can Regragui - very much with a foot in both continents - buck that trend after dispatching some of the world's established heavyweights at this World Cup?