I am usually one to call out bad refereeing decisions in favour of Barca and Real Madrid. For once VAR went against Madrid. They lost 1-2 at home to Levante yesterday after the VAR overturned a FK which had been awarded against Madrid for a Vinicius Jr foul just outside the box, and upgraded to a PK. It looked dodgy as the foul looked to have occurred a few inches outside the box.
Top

Each time I get annoyed at bad refereeing decisions in the EPL, La Liga refs appear to make the EPL refs look like the second coming of Collina.

Sitrep: Real Valladolid v Real Madrid yesterday - the score is 0-0 with 10 minutes left and since Valladolid's players did not read the script and refused to play the role assigned to them by letting Madrid score, I started to worry for them and that the officials would manufacture a way to screw them. Lo and behold:

1) In the first half Madrid's Naija/Austrian player David Alaba hacked down a Valladolid attacker in the area for the most stonewall penalty you will ever see. The Spanish commentators immediately screamed "penal" in unison, yet the ref did not award the penalty, and the VAR did not advise him to look at the monitor either.

2) In a strange interpretation of the offside law which will interest FIFA, a Valladolid attacker (admittedly standing in a slightly offside position) ran clean through on goal - except that a Madrid player had accidentally played the ball to him. Even primary school kids know that an attacking player cannot be flagged offside (even if in an offside position) if an opposition player played the ball to him. Yet despite this basic Law of the Game, the linesman flagged for offside and the ref whistled for a Madrid free kick and did not overrule his lino for some odd reason.

To compound matters, with only 10 minutes left, Madrid got a corner which Rudiger headed onto the arm of Valladolid's CD Javi Sanchez - who because Rudiger pushed him, had his back turned and was not even looking at Rudiger or the ball. The Spanish commentator said "para mi, no penal". It was a carbon copy of the "handball" penalty awarded against Spurs' Eric Dier while playing against Newcastle in 2020 (that decision was so outrageous that it caused the FA to change the handball parameters and issue a clarification).

In La Liga niceties such as rules mean little to the refs, and the ref gave Madrid a penalty, and compounded the scandal by penalising Sanchez with a yellow card, and giving a straight red card against Sergio Leon (who was standing next to the touchline about 40 yards away from play). I can only assume that the red card was for dissent. How on earth can you book a player for a "handball" that occurred after he had been fouled, and while he had his back turned to the ball and was facing the crowd?

Benzema of course scored the penalty, and Madrid won 2-0 with 2 goals in the last 10 minutes against 10 man Valladolid - in line with the pre-game script.

The lengths that La Liga refs are willing to go, to commit ojoro, is mind boggling. 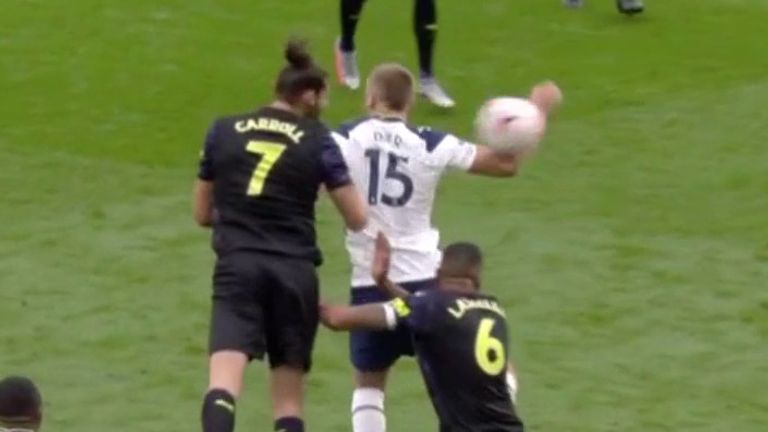 wiseone wrote: ↑Wed Dec 26, 2018 12:14 am The really weird thing is that VAR has not stopped the scandalous decisions. Last week Celta were denied a blatant penalty for a handball by a Barca defender. This was the case even though the VAR had the opportunity to replay and watch the handball on video replay. Yet still no penalty.

You guys should start an EPL version of this thread too.

The EPL official’s antics have been off the charts.
“If your opponent is of choleric temper, seek to irritate him. Pretend to be weak, that he may grow arrogant.”- Sun Tzu
Top

Did anyone watch the Villarreal v Real Madrid game? The ref awarded two utter joke penalties. Can someone please explain why the penalty against David Alaba was legit when IFAB’s guidance says that handball should not be awarded against a player if the ball

hits a player’s arm as he falls to the ground and uses his arm to support his falling body? Alaba slipped and fell and as he was on the ground, Foyth kicked the ball against his hand.

That is why the refs did not award a penalty for this blatant handball by Arsenal’s Cedric against Man Utd last season:

The bigger joke of a penalty was in favor of Madrid vs Valladolid. And subsequent red card for protesting
Form is temporary; Class is Permanent!
Liverpool, European Champions 2005.

We watched this very boring video, 500 times, of Sacchi doing defensive drills, using sticks and without the ball, with Maldini, Baresi and Albertini. We used to think before then that if the other players are better, you have to lose. After that we learned anything is possible – you can beat better teams by using tactics." Jurgen Klopp
Top

I posted about that above.


txj wrote: ↑Sun Jan 08, 2023 9:31 pm The bigger joke of a penalty was in favor of Madrid vs Valladolid. And subsequent red card for protesting

La Liga "refereeing" is an utter abomination. Juventus got relegated for match fixing and bribing refs. I am amazed similar scandals and punishments have not emerged in La Liga.

This past weekend I watched Chukwueze playing for Villarreal v Girona.

1) Awarded Villarreal a "penalty" in the 78th minute; even though Girona's Santiago Bueno fouled Villarreal's Álex Baena OUTSIDE the box.

The ref also sent off Bueno. Mercifully VAR told the ref that the foul was outside the box and forced him to award a FK instead of a PK. Yet he still sent off Bueno.

2) In the 91st minute, the ref awarded Villarreal yet another phantom "penalty" after Girona's Oriol Romeu (ex Chelsea - remember him?) cleared the ball and Pau Torres fell down beside him as if someone amputated him. For some odd reason VAR did not ask the ref to check the monitor even though replays showed that Romeu played the ball. It was a laughable decision. Gerard Moreno took the penalty but Girona's GK Paolo Gazzaniga (ex Spurs - remember him?) saved the penalty kick.

3) Even though the officials indicated 6 minutes of added time, somehow the game is still going on after 100 minutes (I kid you not!). The ref then awards Villarreal a third mystery "penalty" (2 of which he awarded after the 90th minute!).

Daniel Parejo converted the penalty and the ref immediately blew the full-time whistle to give Villarreal a 1-0 win over 10 man Girona.

I cannot understand how officials can get away with this sort of corrupt behaviour on live TV. At times it seems that a criminal match fixing syndicate is in charge of La Liga "refereeing".