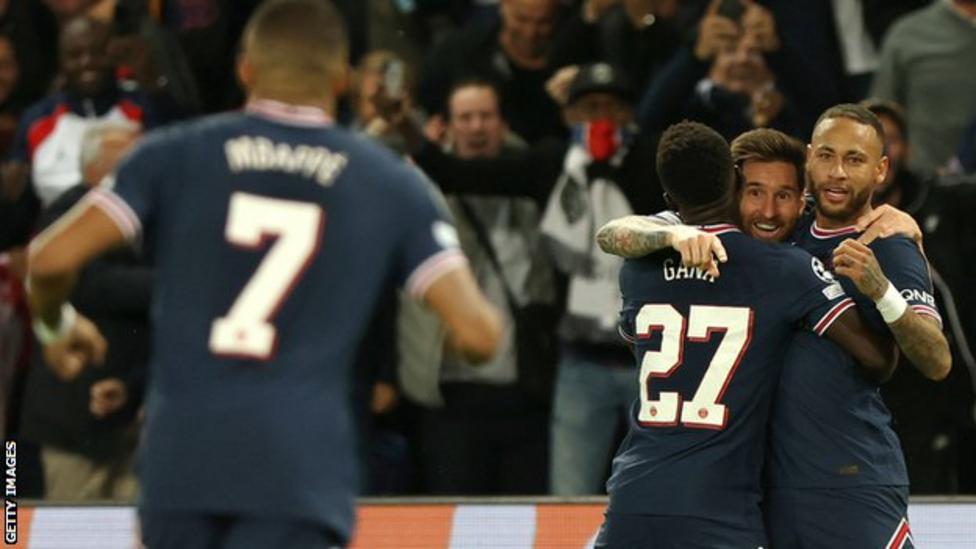 When 150,000 Lionel Messi shirts went on sale on Paris St-Germain's website the day his signing was announced, they were gone within seven minutes.

PSG have been here before, when Neymar signed about four years earlier, but it's fair to say even they were surprised by the excitement that has greeted the arrival of Argentine superstar Messi.

For the man himself, though, this is a completely new experience. He joined Barcelona as a boy, aged 13. Now 34, he and his young family are adjusting to a new life in a city he had last visited in December 2019, when he called in to pick up his record sixth Ballon d'Or.

From the moment he landed in France in August, everyone at PSG has made a big effort to make him feel welcome. A group meeting was organised at Ander Herrera's home, where the player was holding a barbecue to celebrate his birthday, and Messi has felt backed in the dressing room from the day he arrived.

Even former Real Madrid defender Sergio Ramos, with whom Messi locked horns on numerous occasions in Spain, was quick to welcome him, and before signing he had already discussed the possibility of signing with Angel di Maria, Neymar and Leandro Paredes.

Neymar even went so far as to offer him his number 10 shirt, which Messi declined, opting instead for the number 30 that he wore as a teenager when he made his senior debut for Barca.

He was also pleasantly surprised by the warmth of the reception given to him by Kylian Mbappe - who incidentally speaks perfect Spanish - as well as that of happy-go-lucky team joker Marco Verratti.

The good rapport Messi has always enjoyed with PSG boss and countryman Mauricio Pochettino was another reason why the move was attractive. They understand one another, talk the same language both literally and figuratively, and spoke on the phone just after it was announced that Messi was leaving Barcelona. Theirs is a relationship that goes back some way.

At his first day of PSG training, Messi was shown some gym equipment by Sebastiano Pochettino, the manager's son. Messi looked puzzled, firstly because it amused him that the little kid he had last seen running around a Barcelona flat as a young child was now the guy suggesting a training regime. Secondly, he wasn't sure what to do with the equipment. Yes, he had seen them at Barcelona, but he'd never been asked to use them.

That is another example of change for Messi, but out on the pitch things have been more familiar. From his first match, a 2-0 win at Reims on 29 August, PSG have played like a team built around him. In attack they look first for his diagonal runs from the right wing, working together with little passes before that final injection of pace up front.

And Neymar has been more than happy to convert himself into a winger again, playing on the left as he did with Messi at Barcelona, instead of being at the centre of everything, as he had been so far at PSG.

Against Manchester City in the Champions League last week, however, it was different. PSG quickly realised they wouldn't dominate possession so they dropped back and looked to counter attack. They did so to great effect, but playing that way you will always get less out of Messi.

They will expect to be the team controlling possession in most games. But that may present another problem: such a style benefits Messi and Neymar more than Mbappe, because the Frenchman needs space to run. It's a dynamic that may be difficult for Pochettino to balance.

All three forwards also need to work harder defensively. There have been examples in the first few games of the team showing a tendency to split in two, with the three stars up front losing contact with the rest of the side.

They certainly came unstuck at the weekend, losing 2-0 at Rennes for a first league defeat of the season - and without managing a shot on target. Before that they had won all eight of their Ligue 1 games as they seek to regain the title won by Lille last term.

A few weeks earlier, much was made of Messi's substitution in his home debut, a 2-1 win against Lyon on 20 September. But stories about him being "stunned" and "bewildered" about being replaced are wide of the mark.

While it is certainly true that Messi wants to play every minute of every game, Pochettino made the decision to take him off as he knew he had felt some discomfort in his knee. The manager suspected something was wrong, and his instinct proved to be correct as Messi missed the next the next couple of days' training.

There was never a question about Messi's commitment to the team. And if proof were needed it came when, after scoring a stunning 74th-minute goal to seal the 2-0 victory over Manchester City, he took on the role of "draught excluder" in a defensive wall. When captain Marquinhos asked him to do it (the position is normally taken by Verratti who had by that time been substituted) he didn't think twice.

Here was another example of the outside world jumping to misinterpret Messi's mood. While former top players opted to take offence on his behalf and bluster about a humiliation for the great player, Messi himself saw it as no more than something he had to do for the sake of the team. 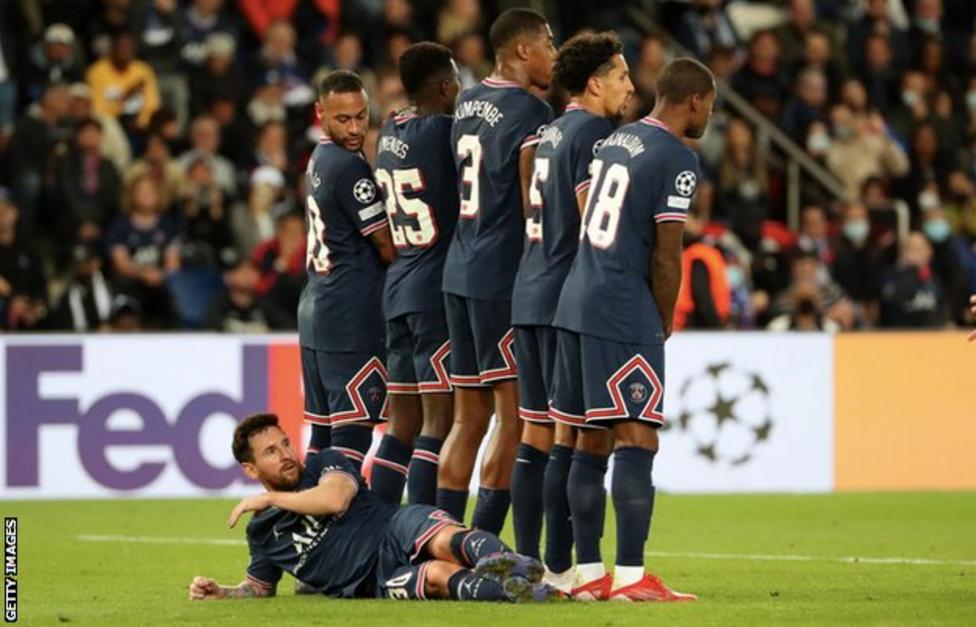 Messi joined PSG on a two-year contract, with an option for a third year

That defeat at Rennes aside, the only teething problems for Messi so far have come off the pitch.

The Argentine was less than impressed that details of his contract and wages were revealed on the front cover of French newspaper L'Equipe. In Spain it took years for his salary to be leaked, in France it took less than two months - although the report is said to have been inaccurate.

Added to that is an irritating soap opera developing around the Messi family's search for a property in Paris. The local press have frequently featured interviews with estate agents and property experts pontificating as to what type of home they are looking to buy.

In France it is looking like becoming a different story and he is not happy with the intrusion, not least because it represents a potential security threat. 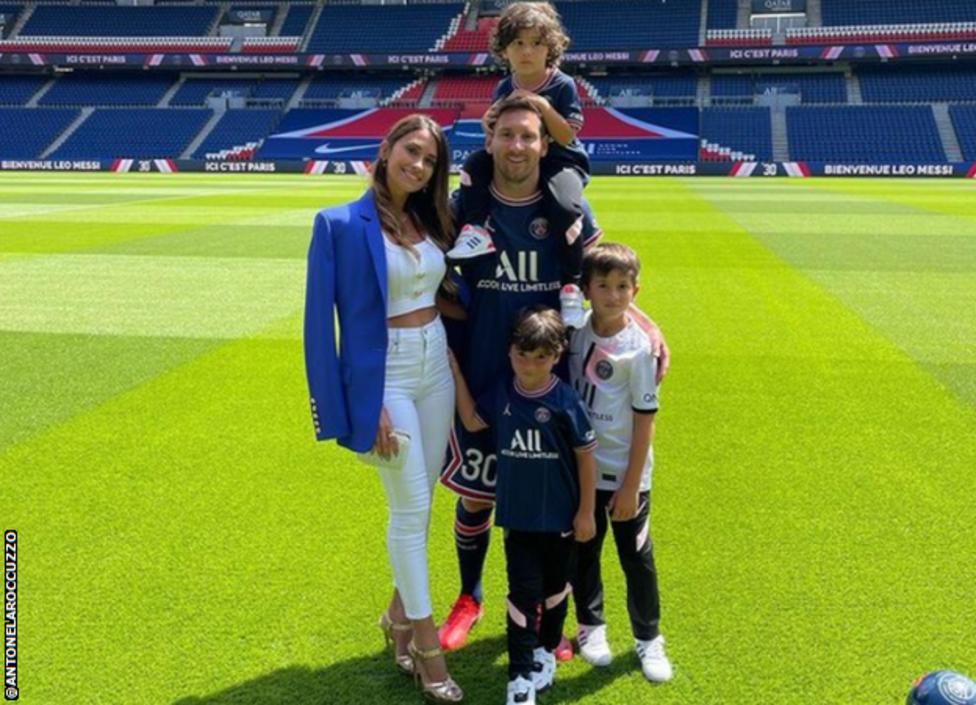 Messi and wife Antonela have been together since 2008

Living with his family in a hotel - albeit an extremely luxurious and spacious one - is far from ideal, although it has to be said that Pochettino still does the same.

The family's main objective is to settle as soon as possible, although that is easier said than done because there are not many properties in Paris that can offer the garden and expansive outdoor living they enjoyed at their home in Castelldefels on the outskirts of Barcelona.

At the moment they occasionally take walks around parks near their hotel, always accompanied by security. But the search for a home is almost done, and trying to put everything in place is Messi's wife Antonela.

It is impossible to overstate her role, not just as a partner and mother of their children, but also as best friend, confidante and, in a situation like this, a fundamental component in ensuring everything runs as smoothly as possible.

Messi first met Antonela Roccuzzo, a fellow native of Rosario, when he was just five years old. She is the cousin of his childhood best friend Lucas Scaglia, who is also a footballer.

The couple, together since 2008, are inseparable. Messi has been quick to say the hardest thing about making the decision to come to Paris was telling first his wife then his children about the move.

But in Antonela he has his rock, the pillar of strength that keeps the family strong and stable. The idea he would ever have contemplated the move without the total support of his soulmate and his children that he adores is unthinkable.

Perhaps conscious of the notion that the "fruit never falls far from the tree", Messi's two oldest children train twice a week with PSG's young sides, and Antonella has taken charge of that. She also takes the children to and from school and spends time with some of her personal projects: sponsorships, partnerships and endorsements for herself, as well as being active on social media.

When the family look out of their hotel window the chances are they will be able to see some of the many supporters who still gather there, although the initial wave of euphoria has at least calmed to the extent that the fences put in place to keep the hordes at bay have now been removed.

But "Messimania" shows no sign of abating in Paris more broadly. When I walked into the club shop with the intention of buying either a home or away PSG Messi shirt on the day of the game against Manchester City, they had sold out.

His goal in that game - and the promise of many more to come - means we should be in for quite a ride.